Office of the Chancellor

The Chancellor is the ceremonial head of the University of the Fraser Valley, presiding over Convocation and conferring UFV credentials (degrees, diplomas, and certificates). As a representative of the public interest at the university, the Chancellor also acts as an ambassador for UFV and is called upon to represent the institution at major events both on and off campus. The role of Chancellor is voluntary and is held for a three-year term. 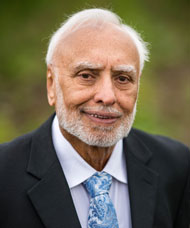 A long-time proponent of community engagement and integration, Sidhu will take over from Dr. Gwen Point, who served as UFV’s second Chancellor from 2015 to the present, following two terms by Brian Minter.

“I’m extremely honoured and proud to join the University of the Fraser Valley in this capacity,” Sidhu said.

"UFV has a rich history of in inclusivity and community leadership. Needless to say I’m very excited to contribute as we move forward together."

An accountant by trade before emigrating from Malaysia in 1974, Sidhu worked first on a dairy farm, then as a bookkeeper with the Canada Farm Labour Pool, where over the course of his 21 year career he became an unofficial ambassador, bridging gaps in culture and language between local businesses and people emigrating from the Punjab.

Sidhu is best known for founding B.C.’s first multi-language newspaper, the Punjabi Patrika. Printing 15,000 copies every Friday in English and Punjabi, the Patrika was established as a beacon of inclusivity and multicultural connection nearly 22 years ago.

Sidhu received an honorary degree from UFV in 2017 in recognition of his community service.

As Chancellor, Sidhu will act as ceremonial head of UFV while serving as a member of the Board of Governors and the Senate. He will also preside over convocation, conferring UFV degrees, diplomas, and certificates, and serve as an ambassador for UFV at major events.

Andy Sidhu will be the University of the Fraser Valley’s third Chancellor. He assumes responsibilities of the role on April 1, 2018.

Read the full story on ufvtoday.ca