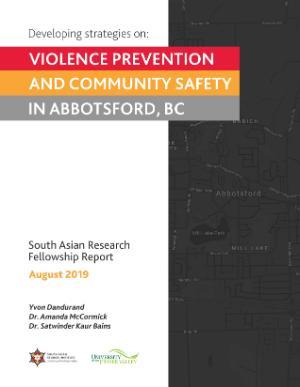 The South Asian Studies Institute is pleased to present its first South Asian Research Fellowship Report from the 2019 South Asian Research Fellowship Project.
The aim of this report is to provide agencies, individuals and groups concerned with community safety with a deeper understanding of the issues as they undertake innovative and targeted approaches to prevent gang related violence.
The work (consultation) undertaken in this report provides a focused approach to understanding violence prevention strategies aimed at South Asian Canadian youth that have been implemented in the Abbotsford region.
Recommendations made in this report help us support continuing efforts for engagement, dialogue, backing, and commitment to make our communities safer. As well, they allow us to gain a better understanding of what more needs to be done.
To read the report please click: "Developing Strategies on Violence Prevention and Community Safety in Abbotsford" 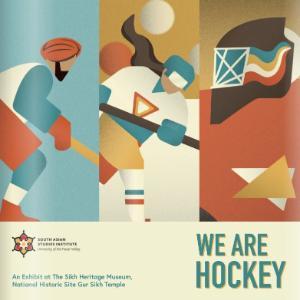 The SASI published 'We Are Hockey' catalogue based on its 2019 curated exhibit at the Sikh Heritage Museum, National Historic Site and Gur Sikh Temple.

Please click on 'We Are Hockey' to view the e-version of the catalogue. 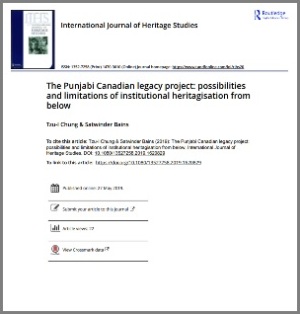 The Punjabi Canadian legacy project: possibilities and limitations of institutional heritagisation from below

This article examines the Punjabi Canadian Legacy Project (PCLP), a partnership project between the Royal British Columbia Museum and the South Asian Studies Institute at the University of the Fraser Valley, as a case study of heritage from below. The project is based on community action research and practices, joining forces of memory, research, and community institutions, organisations, and groups. Considering ‘heritagisation’ as a process of heritage building, and drawing on their experience as practitioners on this project, the authors argue for the need to consider the vast diversities within and among communities, and the need to work on ‘heritagisation’ through ongoing dialogic engagement. Through a myriad of continuous dialogues and inherent challenges, the process and progress of the PCLP is shaped by this dialogic engagement. As an ongoing project, the PCLP demonstrates how a network extended to diverse participants with shared goals can emerge through the organically developed heritagisation process encouraged by the partners’ collaborative efforts in an experimental model for community work by memory and research institutions.

The article can be accesed by visiting: International Journal of Heritage Studies 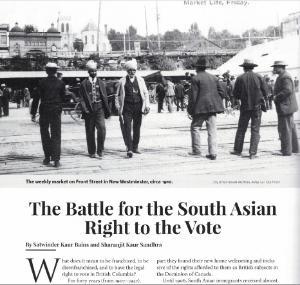 T‌he Battle for the South Asian Right to the Vote

The South Asian Studies Institute contributed an article in the BC Historical Federation Magazine based on its 2017 curated exhibit on the South Asian franchise in B.C. The article can be read by clicking: The Battle for the South Asian Right to the Vote‌. 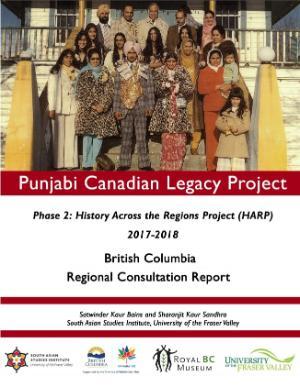 The project established informal engagement hubs in communities by building on existing networks. These communities were in six provincial regions that have significant Punjabi roots: Victoria and Duncan (Vancouver Island), Prince George (the North), Golden (the Kootenay), Kelowna (the Okanagan), Abbotsford (Fraser Valley), and Vancouver and Surrey (Lower Mainland).

The objective of these hubs was to bring people together to record family histories, and share and collect Punjabi historical and contemporary perspectives on migration, employment, social organizations, family settlements, integration, political struggles, experiences of racism, discriminatory legislation, inter-generational and intercultural experiences, etc. The project team travelled to and undertook historical research in each of these communities and, along with our project partners, hosted workshops and consultations in each community.

The report highlights the feedback and conversations with community members from all seven regions across British Columbia. The final report can be found by clicking: Punjabi Canadian Legacy Project Phase II. 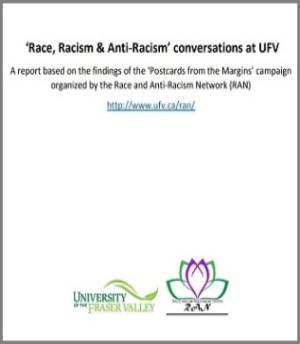 ‌In 2015, RAN launched a postcard and online campaign entitled “Postcards from the Margins.” The project was designed to gather current understanding about racism, race-related harassment, bullying and discrimination on UFV’s campuses by way of an anecdote collecting campaign. RAN designed a number of postcards for dissemination to UFV wide community eliciting responses on racism through a simple question: Is there racism on campus? Share your story or opinion anonymously. These postcards could be dropped off at the anonymous drop off locations or sent via anonymous internet collection on campus. The cards requested 6 anonymous personal experiences and perspectives on race and racism by UFV’s community(s) of students, faculty, staff and management across the campuses. This project’s aim was to create a “snapshot in time.” You can view the report based on the findings of the 'Postcard from the Margins' Campaign by visiting: The Race and Anti-Racism Network 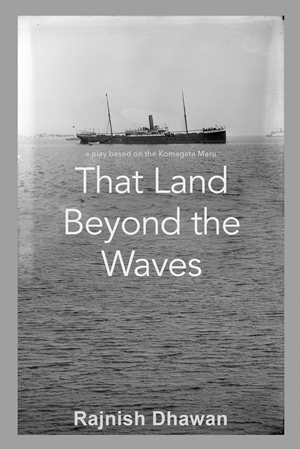 That Land Beyond the Waves, A Play Based on the Komagata Maru by Rajnish Dhawan

Harnam Singh is an Indian immigrant in Canada who is eagerly looking forward to meeting his sister Harsimran Kaur who is stranded on board the ill-fated ship Komagata Maru that arrived on the shores of Vancouver in May, 1914 carrying 376 Indian passengers. The majority of these passengers were Indian men and British subjects intending to immigrate to Canada. But the Canadian government of the time denied entry to all but 22 of these passengers, citing the continuous journey legislation that required all ships carrying immigrants to travel directly from their point of origin. On July 23, 1914, after a two-month legal battle, the ship was forced out of Canadian waters.

As the waves of the Pacific continue to thwart all of Harnam’s efforts to meet his sister, he finds some solace in the company of an Abbotsford resident, Frances. In the racially charged atmosphere of the time, a tender bond develops between Harnam and Frances that provides a semblance of humanity that transcends the boundaries of colour and creed. The play is less about statistics and historical personages and more about the response of various communities/individuals to this tragic incident. It is about the pain of being separated from loved ones and the inability to mitigate their sufferings; about the failure of authorities to see beyond race statistics; and about feeling the pain of the individual as a consequence of the events that unfolded on Canadian shores.

For a digital copy of the play, please click: That Land Beyond the Waves. 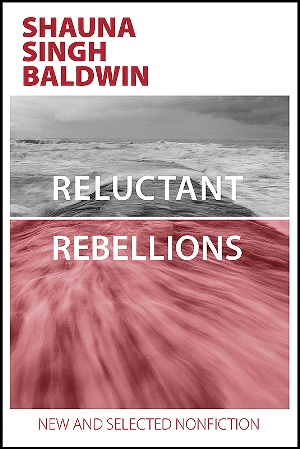 In 15 speeches and essays written between 2001 and 2015, Baldwin brings a new perspective and voice to Canadian public discourse. Offering examples from her personal journey as a writer and a South Asian woman born in Canada, married to an American, living in the United States, and with strong ties to India, Baldwin transcends homogenized national identities and is an example of a truly global citizen. 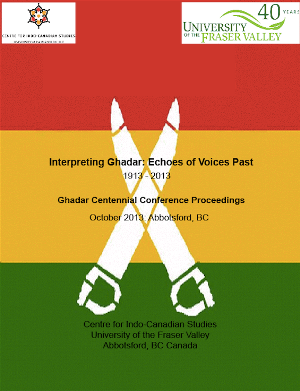 In 2013, the Centre for Indo-Canadian Studies hosted conference proceedings to commemorate the centennial year of the founding of the Ghadar movement, an anti-colonial movement that came about through the efforts of South Asian's living in the North American Diaspora. This book is a compilation based on attendees and their presentations

For the online version of the book, visit Ghadar Conference Proceedings. 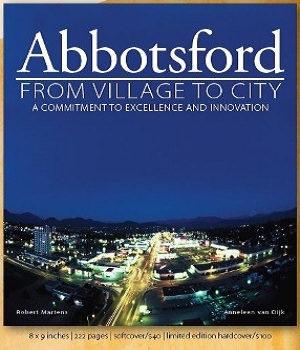 2015 CICS Contributes Chapter in MSA Published Book: Abbotsford From Village to City: A Commitment to Excellence and Innovation 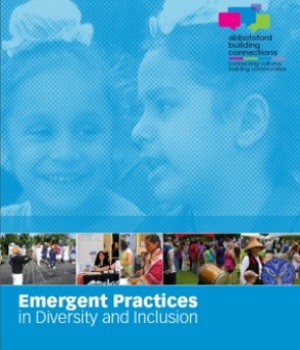 Abbotsford Building Connections Final Report, published in partnership with the City of Abbotsford and the Centre for Indo Canadian Studies 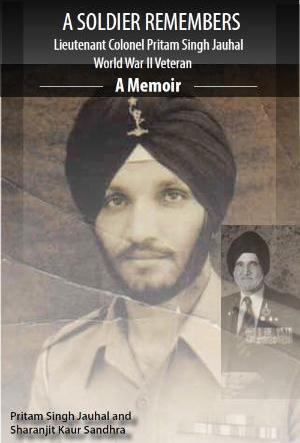 In the 1970’s Canadian society was struggling with issues of race and racism based on a general ignorance among its citizenry. When Pritam Singh emigrated to BC, Canada in 1980 he felt shocked and disbelief that a man of his caliber and military ranking would have to face a barrage of blatant racism. This discrimination reached its climax during the Remembrance Day ceremonies of 1993 when Lieutenant Colonel Pritam Singh was denied entrance into the Surrey Newton Legion Branch because he was wearing a turban. True to his convictions and his Sikh faith, Pritam Singh waged a long and difficult struggle for Sikh veterans to be allowed to wear this key article of their faith in the Legion.

This biography is a story of Pritam Singh’s struggle with the Legion in 1993, but it is also much more than that. This book chronicles the struggles and accomplishments of an immigrant Sikh-Canadian, and the lifelong service he has given to his community. Pritam Singh is a true role model and his story needs to be shared.

Undertaken by the CICS through the auspices of the Khalsa Diwan Society, Abbotsford, this is the Indo-Canadian 100 Year Punjabi Community Stories Project. Over the past five plus years, researchers, faculty and staff at the CICS have interviewed, transcribed and narrated the stories of those first Indo-Canadian settlers who contributed to the building of our communities from 1904 onwards. These narratives allow for the perseverance and vision of these people to be etched in time. Please click on the link below to view this extensive database, for narratives on the people, and to view their images.